Reviews For Dining on Ashes
You must login (register) to review.
Title: Chapter 17 Reviewer: Amy Signed

I liked the story very much , as the characters and the development of their relationship was very interesting and filled with suspense. Thestorywas plausible and I think Eloise would be the right type of Woman för Adam.

I had a Great time Reading,  thank you a lot. I like your Stories best in the library and I think you would have been a great author for the series

Very intriguing story, Ant! Once again, Adam, who always hides his emotions, seems to leave all that behind when it comes to a woman he wants. And in this case, he's so smitten that he proposes marriage to this woman who obviously doesn't love him or even want him around.

I know the poor misguided woman had a hard first marriage -- but how could she not see the inate goodness in Adam Cartwright? And the fact that he's the most gorgeous man in the Nevada territory -- and possibly the world -- should be further enticement (just my opinion).

And I was a little disappointed at Adam when he suggested that instead of Eloise running a bakery, she should find herself a husband to support her. Chauvinist. But as much as I admire Eloise for moving to Virginia City with her aunt and trying to make something of life, did she really think it rhrough? A French bakery in Virginia City?? Great plot idea!

I do love seeing Adam out of the West, because he's so good at dressing the part. Pa told him to take his bowler, and he wears it so well! 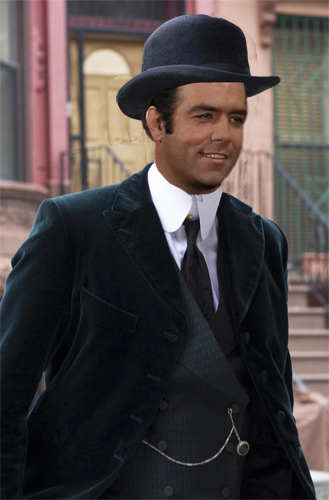 PS: By the way, I thought it was pretty low of Ben to try and outbid Adam for Eloise's box lunch. He knew Adam was gone on her! That wasn't very nice!

Love seeing big city Adam! Thanks for the pic, Peg!  I was just thinking about you yesterday and wondering how you were and then I saw this review. As for Ben bidding against Adam , it was all in fun as he explained, and to raise the price but our Adam didn't want to be made a fool so he quit and went home to pout and nurse his injured pride. Too bad, huh?  Anyway, he does get his gir--finallyl. As far as his advice for Eloise to find a hubby to take are of her, considering her lack of business acumen, not bad advice. I figured that although Adam may have been forward thinking in many areas (remember his talk with Rebecca--wanting a husband and children, what every woman wants according to him) he was a man of his time. And quite a man he was.

Thanks for reading, reviewng and the bonus cap! He does look cute in a bowler.

Thank you, Sherrie. I'm pleased that you liked this story; that's always nice to hear.

That was a Brillient story and I don't usually weather romance. I loved it. It was different. You gave the reader an understanding for Eloise that had us routing for her all through this. She had been so let down by her no good previous husband. Ugh the part where he said he didn't want his wife behaving like a whore, kill him

And Adams genuine regard for her ugh that was so sweet. You did a great job with this, I'm a cynical person who usually rolls my eyes at romance stories but I even had to brush away a few tears reading some passages of this wonderful tale. Thank you

Thank you, Charlotte, for taking a chance and reading this story. I know that romances can often be a bit maudlin and saccharine and I do try to modify that aspect. And Eloise is not all that likeable but I tried to make her comprehensible and I'm pleased to know I succeeded.  Thank you for leaving a review and sharing your thoughts.

Well this story left me with mixed emotions. I have to say at the beginning I didn't like Eloise at all but by the end I grew fond of her! This was definitely a challenge love for Adam. Good Read THANKS!

a other interesting story I enjoyed reading it

Thanks, Pam. Glad that you enjoyed it.

I always enjoy your stories. The characters act as adults in complex adult situations. I appreciate your ability to take these characters beyond the TV Cartwrights.

I'm flattered by your comments and am glad that you find me an author with an interesting story to tell. Thank you for reading and sharing your thoughts, EPM.

Well worth the rerun, a sweet and sour romance, similiar to peeling the layers off an onion it may sting your fingers and bring tears to your eye's but the final result will be well worth the effort, he could always see through that sometimes sour dispostion, and Eloise had good reason to be standoffish, l don't think Adam was dissappionted,and neither was l.

Ant l am trying to figure out why l tend to review your stories with a cullinary bent, either l am hungry at the time of writing, not just for your words or eating is my next best thing to do besides, or when l am reading your yummy words.

Well, ansinico, the title has "Dining.." in it; maybe it is a subliminal suggestion.  :-D

Thank you for reviewing the story; I'm glad that you weren't disappointed in the resolution of the Adam/Eloise relationship and that you enjoyed my little tale of adventure and romance. Thanks.

Wow -- this was a wild ride:  very glad that they were able to learn to love and be kind to one another and appreciate each other.  The depth you have given these characters is impressive.

Thank you for reading, BettyHT, especially since it's a rather lengthy story. Thank you for the compliment about the characters; very generous of you.

This one had me torn from beginning to end. Eloise isn't a likeable character, IMO, and it took Adamant's mastery at weaving an interesting tale to make me see Eloise in a new light. This story has a realistic plot, action scenes that bring Adam to his rightful place as hero *grins*, and an ending that left me wanting more of the story.

I'm glad that the plot was realistic, Tracy; sometimes, as you know being an author yourself, it's hard for the author to tell! :-)  And as for Eloise, I'm not even certain that I like her--well, I do a bit. Thank you for the flattering review and for taking the time to read it. I appreciate that you shared your thoughts with others and with me.

Have to say I had mixed feelings about Elois, anyone who fails to appreciate Adam Cartwright has to be suspect!

Adamant another intriguing story from you and a less than obvious romance. Ben was right to worry about anything developing between two people who guard their emotions so well, but it was enlightening as each slowly realises their feelings for each other. I found the hints to male attitudes to how a woman should react to marital duties interesting, in some ways it is a shame this couldn't be developed more but than there is the limitation of the PG13 rating.

Elois' back story in itself was a compelling mystery to be solved. Had me reading late into the night just to finish. Thanks again for a very enjoyable read.

Thank you, Englishgirl, for reading my litttle offering. I didn't want Eloise to be easy to like--and apparently she isn't. : ) It would have been nice to explore their first "knowiing" of each other but as you said, there are limitations.

Again, I appreciate that you took the time to read "Dining.."--there are soooo many good stories in the Library that it isn't easy to choose. (I hope that you could sleep late this morning.)

Thanks, Bertha. Glad you liked it.

wonderful complex characterizations and love story!  I hope there will be future stories of the two of them

Not sure about future stories but I appreciate your interest. Thanks for reading, for liking the story, and letting me know, PattyAJ.