VOTE! Fun With Captions * Reader's Choice *
In The Heat Of The Moment * Prop Fiction *

Come take a peek at our guest star forum. Here you will find bios on many of our Bonanza guest stars. We offer guest star pictures of the day and regular guest star discussions. 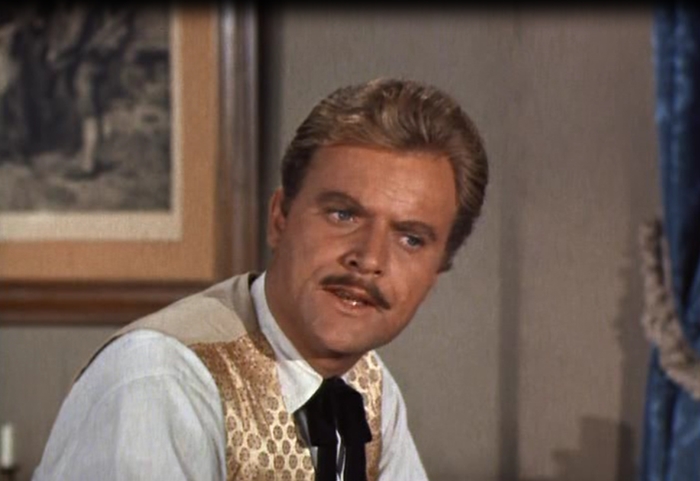 Vic Morrow is known to the public for at least one of the following reasons: he played Sgt. Chip Saunders in the television show Combat! where he became a bigger star than the initially better-known Rick Jason; he was estranged from one of his daughters, actress Jennifer Jason Leigh; he was killed by decapitation along with two child actors in a horrid, freak accident during the filming of Twilight Zone: The Movie.

Morrow was born in Bronx, N.Y. on February 14, 1929 to Jean and Harry Morrow. They were Russian Jewish immigrants and the original family name was Morozoff but it was changed for “Americanization” purposes by either the family or Ellis Island officials. Vic's father was an electrical engineer and supported the family of two sons and a daughter.

At age 17, being the restless, rebellious sort, Vic Morrow dropped out of high school and joined the Navy. Once he served out his hitch, he went to night school and completed his studies to earn his diploma. He then enrolled under the GI Bill, as a pre-law student. One source says it was at Florida State and another, at Florida Southern College. Morrow stated once that the decision to pursue the law, "had more to do with the drama of a great courtroom performance than any love of the law.” During this time, Morrow took part in a college-produced play, I Remember Mama, which went over so well that he abandoned law and pursued a career on the stage. 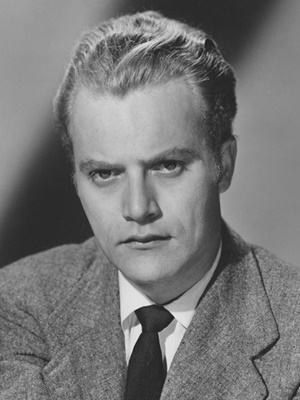 There is some disagreement as to what Morrow did next but it is agreed that he chose to learn his craft the hard way. One source stated he first studied acting at Mexico City College (1950) where he, "performed in bilingual productions of Shakespeare, Moliere and Shaw.” It is agreed though, that Morrow returned to New York and small theatre work before he joined the famous Actors' Workshop under Paul Mann. Abiding by Mann’s wishes, Morrow agreed not to act professionally until his training was over but he needed to support himself. In order to make ends meet, he drove a cab for a living.

After graduation, Morrow was cast as Stanley Kowalksi (can’t you just picture him in a sleeveless T-shirt bellowing, “STELLA!”) in a summer stock production of A Streetcar Named Desire. Morrow’s break into movies came when he turned up without either an agent, an appointment or even lunch money, to audition for MGM's The Blackboard Jungle. Morrow beat out the likes of Steve McQueen and John Cassavetes and was immediately signed and sent to Hollywood. Critics raved about his portrayal of the tough-talking, knife-wielding, street-wise, New York kid Artie West but Morrow wasn’t fazed by the kudos: 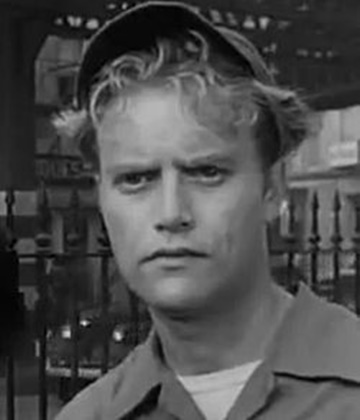 Morrow in Blackboard Jungle. "Sure, the notices were great, but y'da thought they'd picked me up out of an ash can and made me a star. Hell, I'd already done Shakespeare, Chekhov and all those other cats."

Due to this lauded role as a street thug, Vic Morrow was typecast either as the "bad guy,” a.k.a. a heavy--or a misunderstood, troubled young man. The 5’9” actor was, despite his height, an intimidating presence onstage with his broad shoulders and cat-like, swaggering gait. His early career was also marked by his most unusual project; supplying the voice of a canine character in It’s A Dog’s Life. Morrow, disappointed with the direction his career was going, left MGM and went to USC to study directing. He also met and married actress Barbara Turner and they had two daughters, Carrie (1959) and Jennifer (1962). 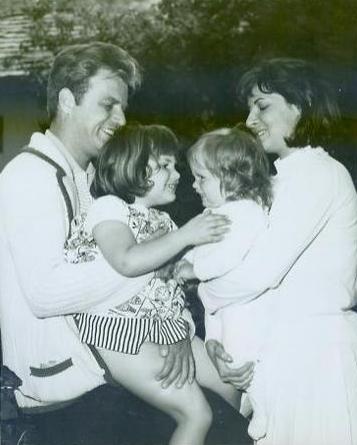 Morrow found he liked directing better than acting and began directing community theatre. Occasionally, he appeared on television or in films but the typecasting was beginning to wear on him. Since Morrow needed to make more money than just the few bits parts he garnered and with a growing family to support, he put aside his “integrity” and hiring another manager, Harry Bloom, he accepted the part that finally made him the “hero.”

Exploiting Morrow's sex-appeal and leading man qualities, Bloom wrangled a screen test for Morrow for the series Combat! The setting was Europe during World War II and initially, Morrow was considered for the officer role (Lt. Hanley) that was later filled by Rick Jason, but both Morrow and his manager declined on the basis that, "no one sympathizes with an officer." Morrow was then offered the role of the brave and highly-respected squad leader Sgt. Chip Saunders. He accepted and had a 5-year run (1962-67) with the popular show. Morrow was nominated for an Emmy for his first season performance as an injured, burned and abandoned Saunders.

Morrow also directed some episodes, “the Pillbox” being the first one. Morrow was a strong director, his trademarks being unusual camera angles and his ability to pull sensitive performances from the actors. Morrow also didn’t like his initial limited appearances in the episodes but since he was such a popular character, he was then given more screen time and became one of the highest paid actors on television at $5,000 a week. 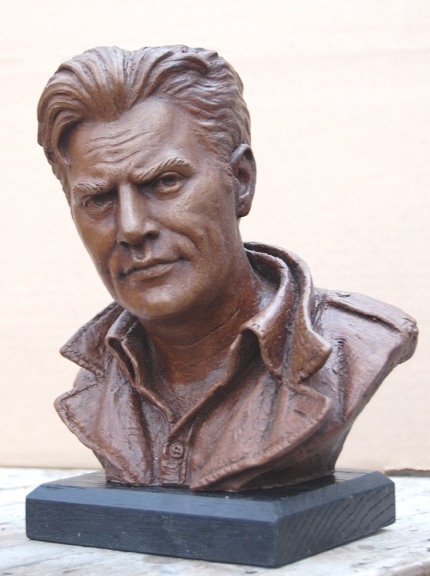 A Michael Keropian sculpture of Morrow. Morrow and his wife separated during this time and the divorce was final in 1965. This was a heavy blow to Morrow and although there are no details, he became estranged from his daughters and never actually reconciled. His daughter, Jennifer Leigh, dropped Morrow from her professional name and adopted the name “Jason’ as her middle name for the close family friend, actor Jason Robards. Morrow saw the dropping of the family name—his name--as the ultimate act of disloyalty although she claimed it was so she wouldn’t receive roles merely for being Vic Morrow’s daughter. Father and daughter were never really reconciled before his death and she was quoted in a 1982 interview as saying, “I always hoped we could work together and, through that, resolve whatever needed to be resolved between us. Now that chance is lost. That's the real tragedy.”

Losing both his family and his steady acting job when Combat! was cancelled in 1967, sent Morrow into a decline from which he was never able to fully recover. He was only again being offered roles as “heavies,” many of these as guest shots on other actors’ hit series. Although a starring role in another series was proposed, Morrow decided he wanted to do films and to be able to direct and produce his own projects, something he enjoyed more than acting. He went to Japan but returned as the offers there were no better than anywhere else.

But this time was the heyday of the “mini-series” and Morrow secured a part in Roots and also turned in a memorable performance as a prison inmate in the made for TV movie, The Glass House with Alan Alda. Morrow also starred in Police Story pilot ("Countdown") which was lauded but with the exception of the 1976 hit The Bad News Bears, Morrow didn’t appear in a major film for which he received critical acclaim and he was offered fewer and smaller TV roles.

Depression and despondency set in after his second failed marriage and basic anonymity as an actor while his daughter was becoming a much acclaimed rising star. Morrow took to drink and driven by the need to work, he accepted roles in low-budget films and took to building a new house. 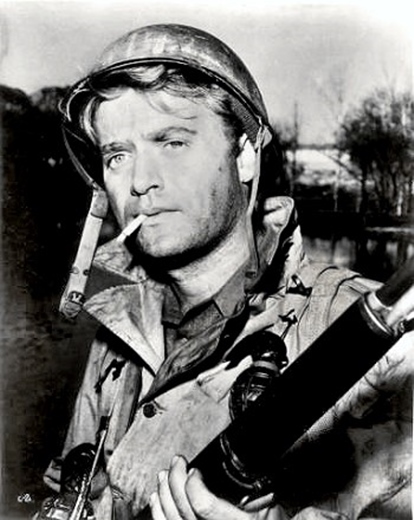 Morrow as Sgt. Chip Saunders in Combat! In 1982, Morrow was offered the role of a soldier in Steven Spielberg's film adaptation of the classic television series The Twilight Zone and he accepted, seeing it as a way to reenter mainstream acting. But it was an ill-fated move as Vic Morrow tragically died in the early morning hours of July 23, 1982 while filming a scene for Twilight Zone: The Movie. As his character waded across the Santa Clara River carrying two Vietnamese children, one 6 years old, the other 7, a malfunctioning helicopter crashed near them. Both Morrow and one of the children were decapitated. The other was crushed under the wreckage. In his will, composed in purple felt-pen on yellow legal paper written half a year before his death, Morrow left the bulk of his million-dollar estate (house, bank accounts, safety deposit boxes, personal effects and his dog) to his elder daughter, Carrie. Jennifer, who had remained estranged from her father, received the token sum of $100. An unidentified female friend was left Morrow’s Screen Actors Guild insurance settlement and some cash.

This topic has 5 replies

Users browsing this forum: No registered users and 0 guests