Summary: Hoss volunteers to be the temporary sheriff of Trouble, California.

This is a silly episode, especially for season 12, late in the Bonanza series.

Note: In the jail in the town of Trouble, there is a wanted poster of Bronco Layne, complete with a picture of the wanted man -- Ty Hardin as Bronco Layne, from the TV western series. This is the first time I've seen this poster, but it also appears again in the jail in The Bucket Dog episode, season 14, minus the picture. It makes me think someone on the Bonanza set was a Bronco fan! 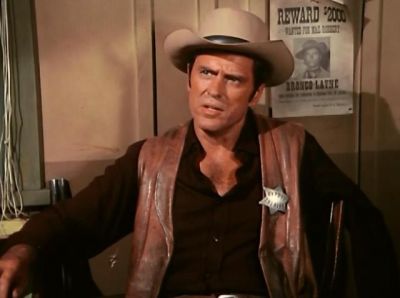 These users thanked the author Tracy for the post:
ellen

Somebody must have had fun sneaking those posters in!
What, are you practicing to be a burglar, bettin' that kind of money on a two-card draw?Joe, "Queen High"
Top

I love Cheyenne, unfortunately we don't get it on cable TV. Anyway, that isn't what I noticed. What I thought was both funny and strange at the same time was this. If my math is correct, this season is set in 1871. The Clanton gang were mostly centered in Tucson, Arizona with Doc Holliday and the Earp brothers, so this is a good 9 years before the gunfight at the O.K. Corral. So what're they doing then, not only in California, but robbing banks in Nevada?

To my knowledge at least, the Clanton gang never went to either state. I could be wrong, though, but still.

Bonanza sure liked to have fun taking people out of history and putting them where they don't belong.

Another fun fact: one of the women who was arguing with the other was Bobo Lewis, who was a guest star in a Monkees episode titled, The Audition (Find the Monkees). She played Carl Ballantine's secretary, Miss Chompsky.
Wait a minute, wait a minute. What you're saying is that at your age, you don't know the difference between a girl and a horse?