VOTE! Fun With Captions * Reader's Choice *
In The Heat Of The Moment * Prop Fiction *

Summary: Doc Lyman is the new school teacher in Virginia City. The students, especially Billy Burgess, are causing a lot of problems for him. Billy even threatens to kill the new teacher. When the teacher is found dead, Billy is accused of the murder. 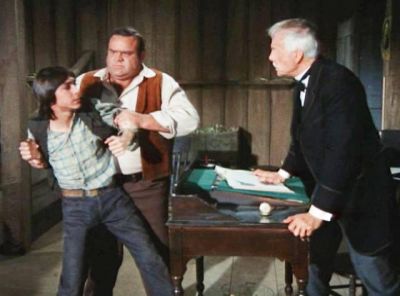 : C'mon, kids, recess is over. Ah'm gonna learn ya some grammar.

That was strange seeing Hoss as the teacher! I loved the way Joe and Candy were snickering, watching Hoss go into the school/barn. Strange place for a school! I wasn't much of a David Cassidy fan but he's ok here. I liked Mercedes McCambridge much better in this one.
Top

I found this one rather interesting and quite funny, too. Because by my calculations, David Cassidy was approximately twenty years old. What twenty year old wants to sit in a classroom, particularly keeping in mind that he already had his high school diploma?!

Also, just curious, but was this before or after the episode Cassie, which his father Jack was in?
Wait a minute, wait a minute. What you're saying is that at your age, you don't know the difference between a girl and a horse?

Ben to Little Joe in "Day of the Dragon."
Top

I like this episode as it is about a boy who lives in a family that is very different from the Cartwrights and how that influences his decisions and, later on, those helping him.

We meet Billy living with his younger siblings, an over-worked mother and in a bad relation with his step-father, forced to go to school where he causes trouble and clashes with the teacher. The parents don´t take time or interest in the boy, his dream of becoming a blacksmith or the anger growing in him, and only stop to listen when he points a rifle at them and runs away.
He wants so desperately to be "seen" that, after being found and caught by Joe and Candy he confesses several murders and later even defies Ben´s attempt to help him.
Billy must stand trial and enjoys the attention and "respect" people pay him, and only when he is found guilty and sentenced to hang he seems to realize what he got himself into. Back in jail he admits to Ben that he is innocent, giving Ben new hope and a big responsability at the same time, and only thanks to a lucky concidence and Pa´s quick thinking can the real murderer be uncovered and Billy be saved.
At the end of the story Billy has, with Ben´s help, been taken in by a friends family, is happy and more responsible than before, he even comes to school of his own free will.

I like how Ben sees past the angry mask Billy shows and, unlike the boys parents (not so much his mother) who only see his faults even before the murder charge, believes and cares about him and his innocence.
What impresses me most is when Ben wants Billy to clear his name in court, knowing the risk involved and taking on a huge responsability while fighting Mrs. Curtis´proposal to send the boy away to save his life, leaving him more guilty than not. He wants the boy to be free, not haunted by the events for the rest of his life, but If Billy is found guilty and hanged, Ben would have a huge weight on his shoulders; after we saw in "The Prime Of Life" what it did to Ben when he felt responsible for Gabe´s death, we can imagine what it would have done to him had the worst happened to Billy here...

That hilarious final scene with Joe and Candy smiling like to Cheshire cats when Hoss is "going to learn them kids some gramar!"

is great, I enjoy when they team up against each other like that (knowing how they like each other and then play mean

) and it makes a light ending to a IMHO good and serious episode.

These users thanked the author Chenoa for the post:
Sierras

"They´re three fine boys Jed...hard workers and a good head on their shoulders...they are close to each other as brothers should be!" Ben in "Springtime"
Top

This is so very true to real life. Many young kids act out in school because of their home life. Too bad everyone doesn't have a 'Ben Cartwright' to care about them. The world might be a better place. Hoss is just the one to 'learn them kids grammar!' Especially since Dan was a former teacher.

I enjoyed the episode. The way it included a need for youth prison reform and how youth can be prone to act out because of environmental circumstances was well played. Always wonderful seeing Joe, Candy and Hoss teasing one another.
If those 3 had been at my school I would've been the best little girl around. Lol
Top
Post Reply
8 posts • Page 1 of 1